Ethical, health and environmental concerns are driving the development of meat alternatives like plant-based and cultured meats. It’s also driving investment by major businesses and entrepreneurs.

Since my return to Investec five years ago, I have noticed an interesting trend in our Thursday lunch meeting. Where it was all chicken and chips five years ago, now approximately a third of the participants are eating meat-free. That’s quite a shift in a relatively short space of time, mostly driven by our new younger recruits.

The trend is echoed outside of the office. Individuals have different motivations for eating meat-free or vegan (no milk, butter, cheese or eggs). Some people view animals as sentient creatures just like humans and believe treating animals like a crop, forced into confined spaces, is cruel.

Others worry that meat is often riddled with antibiotics, creating antibiotic resistance and can be pumped with growth hormones and brine. Or the environmental impact is a concern. Livestock crowd out other species and forests, they increase greenhouse gases and they live on feed that requires fertiliser (and land).

Despite using up over 80% of farmland, meat and dairy only account for 18% of food calories and a third of proteins consumed (“Reducing food’s environmental impacts through producers and consumers,” Poore and Nemecek, Science Journal). Meat is thus an inefficient use of resources to provide the calories humans require.

Beef consumption needs to fall by 90% in order to keep the global temperature increase below two degrees centigrade by 2050.

Research at Potsdam University argues for a massive reduction in meat consumption in order to fight climate change: in the West, they argue, beef consumption needs to fall by 90% in order to keep the global temperature increase below two degrees centigrade by 2050.

The internet abounds with material supporting meat-free choices. I know a number of people who have become meat-free after watching “Cowspiracy” and other similar documentaries.

However, eating meat is deeply entrenched in human culture and to tackle this mental framework, many entrepreneurs have come to market to meet this meaty, meat-free, desire.

Meat is an inefficient use of resources to provide the calories humans require.

Plant-based “meats” that use a combination of plant products to create products that resemble and taste like meat are widely available, like lentil “hamburger” patties or soy-based “sausages”. Some even include beetroot juice to create a bleeding effect.

There are also lab-grown, cultured (“clean”) meat options. The first slaughter-free meat was taste-tested in 2013 by food critic and nutritional scientist Hanni Rutzler. It was a hamburger made from myosatellite stem cells (also known as muscle stem cells) extracted from the shoulder muscles of two beef cattle. The burger cost US$325,000 to make and was funded by Google co-founder Sergey Brin.

Rutzler’s verdict was “I was expecting the texture to be more soft, there’s really a bite to it….It’s close to meat. It’s not that juicy but the consistency is perfect. I missed salt and pepper.” She added: “The surface of the meat was crunchy, but not typically crunchy. It was more like the surface of bread or cake.”

Mosa Meat chief scientific officer and professor at Maastricht University in the Netherlands, Mark Post, who had led the five-year research effort funded by Brin, told the UK Independent that he accepted that the burger was still a work in progress and that he needed to find a way of adding fatty tissue to the cultured beef to make it more palatable (and cheaper for consumers!).

How in vitro meat is made by Professor Mark Post

"Every new technology has the danger in it of transforming jobs," says Post.

"The two large job categories that are going to be affected by this are the feed producers – which is a huge industry, and farmers, specifically livestock farmers.

"It will gradually change so that [farmers] have time to adapt."

"Farmers are entrepreneurs – they will adapt if they have the time to do that," he adds. "For the feed producers, it’s pretty similar. We’ll need feedstock to feed those cells, and if the feed producers are willing to transform their industry and make the feed a little bit finer and a little bit higher quality so that our cells can eat it, then they are fine."

Through 2018, the worldwide funding of novel vegan meat replacement companies reached US$900 million.

Brin is in the good company of Bill Gates and Richard Branson in investing in the cruelty-free industry. According to AT Kearney, the global consulting firm: “Through 2018, the worldwide funding of novel vegan meat replacement companies reached US$900 million.

Every new technology has the danger of transforming jobs [but] farmers are entrepreneurs – they will adapt. For the feed producers, it’s pretty similar.

Meat is a US$1.4 trillion global industry, according to Forbes. Plant-based alternatives are starting to make inroads into this market share. According to a recent Nielsen report, annual U.S. sales of plant-based meat jumped 42% between March 2016 and March 2019 to a total of US$888 million, compared to 1% growth of traditional meat.

Beyond Meat has added US$71.8 million to its revenue over the last two years and increasing sales from both its retail and restaurant and foodservice (R&F) outlet divisions, is likely to add a whopping US$270 million in revenue over the next two years.

Investors clearly think the market has legs if one looks at Tyson Foods. The biggest meat producer in the US has recently expanded into “alternative proteins” with the Raised and Rooted brand. Other cultured meat firms include FutureMeat, Supermeat and Finless Foods, which makes cultured fish.

The recent report by AT Kearney further supports this trend, the study suggests that up to 60% of “meat” in 2040 will be cultured or plant-based, with 35% cultured and 25% plant-based.

It appears that there is a solid market of people who want to exercise their ethical choices, framed by the comfort of their historical food choices. They also appear willing to pay for it, if the Beyond Meat burger – which costs R145 at Hudsons – is anything to go by.

The future appears a little brighter for chickens. 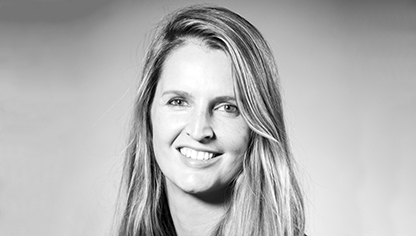 Kate holds a Business Science degree – her clients are Financial Advisers who use Investec's Investment Services. Keeping abreast of market conditions and being able to communicate relevant information is an important component of her role. Kate is also a qualified level 1 Kundalini Yoga teacher.

A professional stockbroking service to support the financial services you offer your clients – help your clients reach their investment goals.

We handle the management of shares and multi-asset class mandates, both domestic and international, to help you realise your clients’ investment goals.